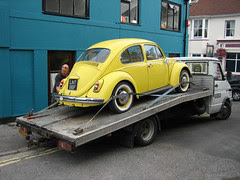 My damaged Beetle being picked up
Originally uploaded by pauls.
Before I went on holiday Darren from Beetlewerks came to pick up my car so he could do a quote to fix the damage.

Since then the quote's been through, I finally got my parking permit (while I can't use it, terrific) and today I finally got the insurance letter through saying they're going to write the car off.

I chose the option to get the car back as scrap if they decided on the write off, so I'm going to go that way. The pay out won't quite cover fixing the damage, but I don't want to start again with another old car and it's not actually that badly damaged, so I'll be bunging more money in to it and hoping it'll keep going a while longer. At least I'll be able to park in my own road when I get it back.
# posted by Paul Silver @ 9:00 pm 0 comments