After Darren called me, I went over to Beetlewerks today to find some more problems he'd found with my car. (Hello Darren if you've found this again.)

Here we can see where the running board has been removed on the passenger side, revealing a hell of a lot of rot, including problems with the bottom of the pillar that holds the door and car together. 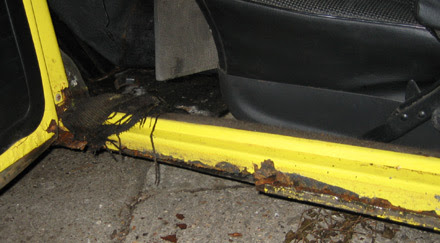 And this weird shot is the bottom of my passenger door, which is also shot, but in a different way: 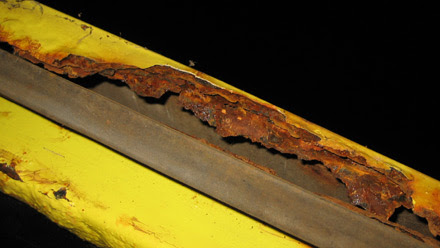 So... more work needs to be done before it can go through it's MOT and get back on the road. I'm kind of at the point now where so much money has gone on it, it's worth spending a bit more to get it finished and up to a very good standard. I just worry that once I get the car back it'll get vandalised again and I'll be back almost to square one.
# posted by Paul Silver @ 6:52 pm 1 comments

If distributing articles is your thing, then here's a pointer to a new article distribution hub: Content City. Stephen's been filling it up with some decent articles from other hubs, but I'm sure he'll appreciate receiging some new ones direct if you have them.
# posted by Paul Silver @ 2:38 pm 0 comments

I finally got around to buying some more memory for my Mac Mini (from the ever-good Crucial.) I decided to go for the DIY upgrade when I first bought it because Apple's memory prices were rather over-priced at the time, although they've dropped since.

If you're thinking of going the DIY route yourself, my advice is: DON'T. It's very fiddly and difficult to get the Mini open, and it's easy to cosmetically damage the box. That wasn't a problem for me - I did cause a little damage, but it's not normally visible and I'm not looking to sell the computer so it won't make any difference to me. However, if you are expecting to sell one, you're likely to damage it doing this upgrade, which will effect the resale price.

I went the putty knife route for the upgrade, following a video I downloaded when I first got the Mini but can't find at the moment - do a search around if you're thinking of doing the same thing.

One thing I'll point out that wasn't in the video - when clamping it back together, there is a row of clips above the panel of ports on the back. I had to push these back with the knife so I could get the case back together. Not bad, but don't try and force it or you'll flatten the clips and you'll have to take it apart again to sort them out.

Here's the damage I caused getting the putty knife in. I opened one side, then couldn't get the other side open until I'd clamped it back together, then started with the other side. It's underneath and quite minor, so normally wouldn't be visible.

I've managed to catch up on some writing for my websites this week. First out of the door is some points on Why CSS is a good thing and on a completely different tack, the difference between drum brakes and disc brakes
# posted by Paul Silver @ 9:03 pm 0 comments