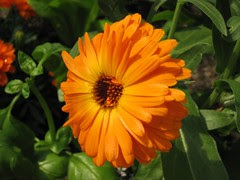 Orange flower in the Eden Project
Originally uploaded by pauls.
I've put some new pictures on Flickr - from my recent holiday in Cornwall and from the VolksWorld VW Show 2006
# posted by Paul Silver @ 12:18 pm 0 comments

I had an old PC that was surplus to requirements (even though it was a touch quicker than my backup PC, but my backup has all the software I need installed and I can't face doing that again unless I really have to.) Mat put me on to Spiders Web IT, who recondition old computer equipment for charities and the people they help. They seem to have a good scheme and I was able to drop my stuff off at a shop in Hove that they have a deal with. If you're looking to get rid of some working equipment, give them a thought. They do have a lowest-spec requirement on PCs (check on their equipment page) but it's pretty low by today's standards.

Alternatively, if you have any old wifi / networking equipment, the people at Pier to Pier might want to take it off your hands (if it's wifi equipment, they might bite your hand in their haste.)
# posted by Paul Silver @ 12:19 pm 0 comments