First update in a very long time. It should come as no surprise that plenty of things have happened in the last three and a half years...
Katie and I have saved up and bought a house, and moved out to Lancing, which is 20 minutes train ride from Brighton.
Just after we moved, Katie gave birth to our lovely son Tom. Which makes this the moment for some photos. In a little under two years he's gone from this little bundle... 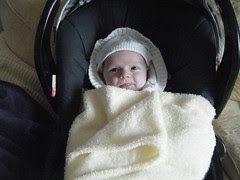 To this little boy...

Tom seems to have inherited my height (he's well above average at the moment) and my hairline (sorry son.) Luckily for him, he has Katie's eyes and cheeky grin.
Unfortunately for us, Tom didn't like sleeping. Whenever he slept on his back, wind would build up inside him and wake him up in pain, and even sleeping on his front wasn't much better. This meant lots of sleeping on mum and dad while we were sitting up, and also lots of lack of sleep for us. Just as things started settling down on the sleep front, he started getting lots of colds so that throws things out again.
So, between working very hard to get the money together for the house, to having Tom and working very hard trying to balance childcare with getting work done to keep said house, things like blogging have been put aside. As has fixing my Beetle, which is now sitting in our garage rather than on my parent's drive, so at least it's rusting at a much reduced rate.
Admittedly, I have been finding time for Twitter, and a bit of Google+. I'm hoping now to find some more time to use the computer for more than just doing client work. I have tried blogging a little about my work stuff on my freelance site but that hasn't been going much better than my writing here.
Oh yes, and Katie and I are getting married next year.
Other highlights from the last few years... being Best Man at Alex and Karin's wedding, meeting my friends Phil and Rachel's son Oliver - only a few months younger than Tom - and all the normal life stuff like birthdays, beer festivals, my friend Richard getting published again, my networking group the Farm growing and growing... and, well, stuff I'll hopefully get around to writing about soon.