As he hasn't got comments on, I'll give my congratulations to Paul for passing his bike test here:

Damn, another bloody motorbikalist I'll have to look out for :-)
# posted by Paul Silver @ 10:43 pm 0 comments

Yesterday I went to Future Anime with Alex. On show: a collection of short films showing what the next stage of anime may be like, chosen by onedotzero. Grimy, muddy and bleak, this isn't your RoboTech glossiness and flood-fill pallette.

All the films were good, but Rogue Farm (req. Flash) and Kakurenbo' (Hide and Seek) particularly stood out. I'm going to go for Rogue Farm as the best, mainly because I'm a sucker for post-apocalyptic science fiction, and it's a mixture of Larry Niven's stage trees, Damon Knight's 'Four in One' with a healthy dose of Philip K Dick stirred in, with a Scottish accent. Brilliant.

We were going to drop in to the Comic Expo happening in the Brighton Metropole, but at £10 a ticket it was a bit much, especially as I was only interested in the co-talk by Harry Harrison.

Not going in turned out to be a good thing as I started to get a migraine shortly after which meant I would have missed the talk anyway. I think that's my first one since New Year's Eve, which is an improvement (especially given the stress I've been putting myself under work-wise) but still very annoying. It wasn't a bad one and the tablets I've got stopped it getting to the throwing-up stage for a change, but I still lost the rest of Saturday and most of today to the kind of hangover it gives you. I was hoping to see the new Harry Potter film this weekend, but I don't think I need to worry about it leaving the cinemas any time soon.
# posted by Paul Silver @ 9:46 pm 2 comments 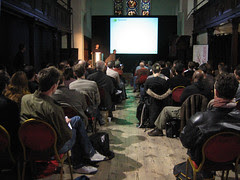 Andy Budd speaking at dconstruct
(there, in the distance.)
Last Friday I was at dconstruct, the 'Web 2.0 grassroots conference' organised by clear:left.

I was a bit unsure of what it would be like, and it turned out to be: good!

The morning's talks were particularly good, covering what Web 2.0 is, or may be, and how it's being used by various companies.

The whole 'Web 2.0' moniker hype was put to bed somewhat by practically every speaker saying it was just a general marketing term to cover a lot of current technologies and the way they're being used. Andy turned out to be an enthusiastic speaker who gave a lively talk to kick off the day.

The afternoon talk by Tom Hume was particularly interesting because it stood out as being about the web and where it's going, but with a slant from the world of mobile phones and services rather than the desktop. I thought it brought a whole level of business-reality to the proceedings that otherwise might have just been "wooo, cool technology."

There are copies of the slides and MP3s of the talks becoming available.
# posted by Paul Silver @ 7:29 pm 0 comments

I'm addicted to Bookworm (again.) It's been a long time since I played it, then it's straight back in at 'Grand Archivist.' Must avoid playing it during the week when work needs to get done.

The page says it doesn't work on Macs, but it seems to work in Firefox fine on OSX 10.4, so that shows some good testing!
# posted by Paul Silver @ 10:35 pm 8 comments

It was the p2b launch today. In celebration of my sorting out some problems with it before the launch I wrote a quick search plugin for Firefox which adds them as a search engine to my Firefox search box.

Key info that helped me sort this out in short order were:

The little gif/png that goes with the code needs to be 16x16 pixels, which wasn't completely clear until I got past the initial part where it tells you to make the image.

If you want to delete a search plugin

If you want to delete a search plugin while you're testing, go to the directory (folder): c:\Program Files\Mozilla Firefox\searchplugins\ and delete the .src and .png for that search.
# posted by Paul Silver @ 4:55 pm 0 comments

I've just finished work on Fjord Interiors, a store for stylish soft furnishings in a Scandiavian stylee. The design and HTML is by Nigel Gordijk, who I seem to be collaborating with on more and more projects this year. The shop integrates in to Secure Trading as the payment gateway, and I've found their system a piece of cake to work with having set up a WorldPay shop early this year.
# posted by Paul Silver @ 10:44 am 0 comments

I've upgraded my iBook to OSX 10.4 (Tiger), which has fixed the problem with the wifi not coming back after it going to sleep, but has caused me some other hassles, some of which are my own fault and some of which aren't.

My ageing HP Deskjet 640c stopped working properly - printing would give me a page where lines were missing, and the tops of letters on lines which did print were missing the top few points of their letters. Joy.

Sevan suggested I try the 'Gimp' drivers that come with 10.4, which I had and they hadn't made any difference. But I tried them again after upgrading to 10.4.3, and they've worked. Which is great and I can print invoices again (very handy, as a freelancer.)

To get the printer working with the Gimp drivers, this is what I did:

I then plugged the printer in and used 'Add' which found the printer automatically. Down where it says 'Print Using: HP Inkjet 2.7.1' I clicked on the drop down list and chose 'HP', then on the list that appears I chose 'HP DeskJet 600/600C - GimpPrint v5.0.0-beta2' I also renamed the 'Name:' field so I knew it was the Gimp driver. Then it started working fine.
# posted by Paul Silver @ 2:35 pm 2 comments